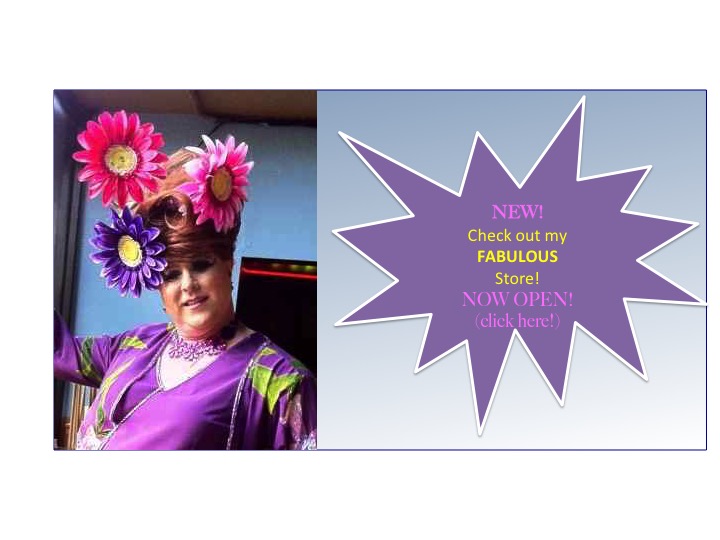 NEW!!! Visit my online store for your chance to buy all things Ginger!

Miss Ginger needed a bookshelf for the craft room, and, having blown her budget on gadgety whoo-ha's for the Sewing Center, needed to come up with something on the cheap.  But of course, it mustn't look "cheap".  Plastic, laminate, and such would just not do! Not wanting to spend money on lumber or time on painting it, Miss Ginger remembered seeing some intriguing posts on Pinterest about making bookshelves from wine bottles, a resource that is certainly plentiful around Chez Ginger! Always a big fan of green-thinking and reusing resources, Miss Ginger found these  posts failed on 2 primary criteria for up-cycling. First, the recycled material was obvious... it was clearly a wine bottle. In this case, Miss Ginger was willing to give a pass, since she thinks that the various shades of green glass in wine bottles are pretty, and many of the labels are works of art in themselves.  (She developed this appreciation for wine label art about the same time she discovered how effective modern-day wine label adhesives are at preventing said art from being removed!)  Her second concern were that the designs of the bookshelves were not well-conceived.  One had staggered the bottles to make the linking mechanism work.... ugly. Another used visible hardware to sort of strap the whole thing together... again, ugly.  Still a third doubled up the center shelves, presumably to make the structure stronger? And uglier, not to mention wasting an entire board!

So, she set to work to figure out the perfect up-cycled bottle bookshelf.  Here's how she pulled it together. 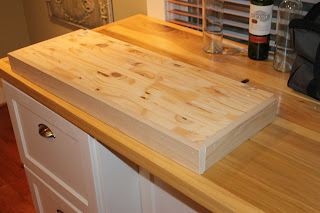 She chose paint-grade finger-jointed pine for the shelves, since it is the cheapest "solid wood" product at the lumber yard.  MDF and particle board won't work for shelves, since there is no structural strength. Finger-jointed pine is actually small scraps of pine by-product from the manufacture of other lumber products, so, in a way, it is up-cycled lumber... and it looks kind of "wine-cellarish!"   She cut her shelves to the same width, added a platform edge to bottom shelf for rigidity, and drilled a quarter inch hole in each corner of every shelf.

Next, on the underside of each shelf, she used a 1 1/8" bit to drill a 1/4 inch deep hole with the same center, to provide a recess to lock the levels together. 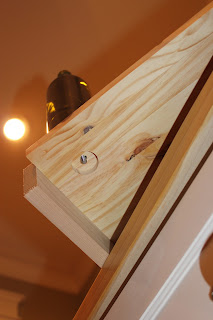 Each "layer" will consist of 1 board, with 4 bottles attached, so after choosing 4 bottles of the same height for each layer, she drilled a small hole in the bottom using a Dremel tool with a 1/4" glass drilling bit.  With the holes drilled, she needed to get a 3" carriage bolt through the hole from the inside, so she used sticky wax (from a Babybel Gouda she had in the fridge) on a skewer to carry the nut through the neck of the bottle. 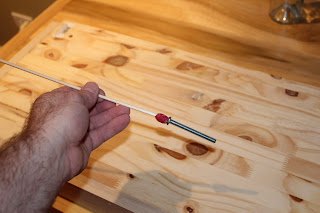 Once the bolt was in place, she could hold it with one hand, and twist the skewer with the other to separate the two, leaving the bolt in position and the skewer ready for it's next target! 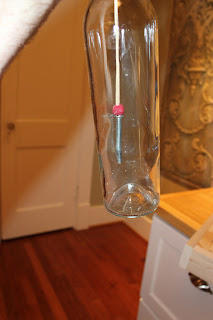 With the bolt in position she needed to hold it still while turning on a nut from the bottom (stop giggling!) so she used the little screwdriver from her Mother's first sewing machine taped onto a length of dowel. (She knew she had kept that little orange screwdriver all these years for a reason!) 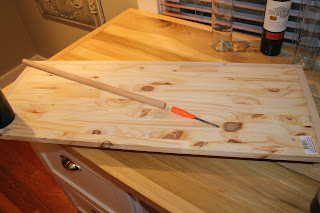 This little jury rig worked perfectly to hold the bolt while the nut was added from below. 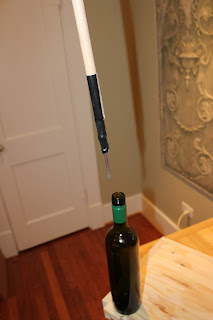 Here's the first "layer", with all four bottle bolted firmly into place.  The next layer was created the same way, with the larger holes on the bottom of each shelf fitting nicely over the tops of the bottles below it. 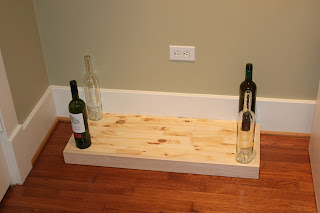 Miss Ginger bolted and stacked each layer the same way, until she reached the height she wanted, which was about 70"! Believe it or not, at this point the unit was really solid, and by sliding the bottom platform away from the wall, she was able to work on the back of the bookshelf.  To give it a more "bookshelfy" look vs. a stack of boards and bottles, she used a length of one-sided corrugated kraft to create a "back" by stapling it to each shelf from behind. Then, for rigidity, she took a length of pine 1x3 and nailed it behind the kraft. You can't see it, but it's behind the kraft on each side, at the very edge, between the paper and the wall. 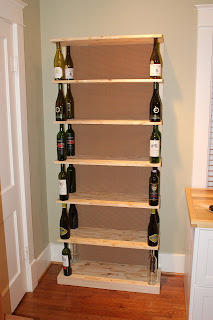 Here it is, partially styled for this photo.  Trust, honey, this bookshelf is strong enough to hold 100's of books, a collection of CD's, or cases and cases of delicious rosy reds or delightful chardonnays! 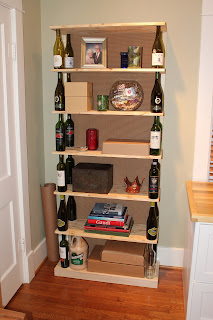 Admittedly, I wouldn't put it in the living room or formal dining area, but for a craft room or rec room, it's kind of darling, and certainly affordable!!

"to hold it still while turning on a nut from the bottom" I knew you were a talented bitch! And the bookcase looks amazing in that spot Miss G! But I do hope your not getting smashed every night just for us to do these posts,lol!

Well, aren't you just too clever and crafty (in a good way)!

Very sustainable - I like it, it almost looks floating...

Ok, I am in awe at your skills..we still need to mount what you made us, but that will come when the bar is done...your gift will be the crowning jewel in the Winchester Room!

That is super cute! I'm in awe!

Miss Ginger Grant, her associates, family, friends, and pets, claim no responsibility for the crafts or activities depicted on this blog. These crafts are not tested for safety, tastefulness, or OSHA compliance. Where outside sources have been referenced, links have been provided. If your intellectual property has been inadvertently compromised in any way, please email ggrant008@aol.com to have the issues rectified immediately. All rights reserved. So you don't forget, order before midnight tomorrow. Mileage based in EPA estimates. Parental discretion advised. Not suitable for children under the age of 21. All models depicted herein are (significantly!) over the age of 21.
Craft at your own risk!

Welcome to the Land of the GingerSnaps!

Check Out My Boards!

Let the world know you are a "Ginger Snap" by adding this tag to your blog!

The FBOMGG is a Networked Blog!

You are visitor number:

Thanks for being a Ginger Snap!